R started preschool this month.  Overnight, her language improved, she slept better, and she seems to be listening more.  She loves her school and we do, too.  It is culturally-aware.  She’s learning some Hebrew, which is cool even if we don’t speak it.  Overall, I thought it would help her social schools to be back around other kids regularly and satisfy her desire for routine, but as I started looking at data at work about early childhood education, I became even more aware of how important this education is.

I think I always just assumed early childhood education was about making friends and learning how the world works.  I think that is true-if not invaluable.  And the break it provides for my husband to job search and recharge on days she attends, is also really great.  But it’s not just “daycare with other stuff” like I had assumed, incorrectly, as a younger person.  It’s age-appropriate education.  And in our case, it’s education taught by people who actually have degrees in this stuff.  R’s program is not super-structured.  It’s not a Montessori- thank god – because while that works great for other kids, that would not be a good fit for her.  It does have activities and lots of tactile and cognitive focus. The kids also spend a majority of their morning outside – even if it’s fairly cold.  This week, the temp barely rose about 20 or it was raining or snowing, so that was not an option.  Overall, I’m thankful we got into this school in a miraculous turn of fate, and I’m so glad it’s a good fit for R.

In our state, only about half (53%) of children aged 3-5 have been enrolled in preschool, pre-k, or kindergarten. There are some surrounding counties in which less than 1/3 of children are enrolled in preschool of any type.  The U.S. doesn’t fare much better at only 60% enrollment.  I had no clue.  And I also was unaware of the breakdown in how children attend in these early years and the disparities due to family income and race which exist in different types of enrollment.

The Brookings Institute did an amazing literature review with a metanalysis about disparities in early childhood education and outcomes from these programs.  I highly recommend you read it.  However, looking at just a couple figures from the report, it Is clear that there are big differences in the way that poor and wealthy children go to school and that race also plays a key role in enrollment differences. 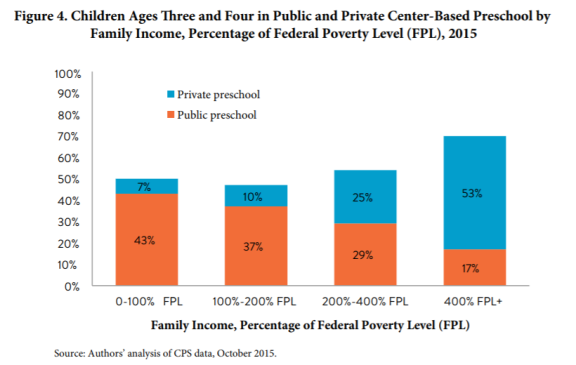 The first figure (Figure 4 from the report) shows a clear trend towards higher enrollment for children from wealthy and middle-class families.  Households with an income 400% or more of the Federal Poverty Level (FPL) attend at a rate of about 70%.  The poorest families only attend at a rate of about 50%. It’s also clear that depending on the household income of the child, parents will choose different preschool options.  For low-income students, this makes a lot of sense.  Programs like Head Start and Early Head Start focus almost exclusively on families who are below 200% of the poverty level in most states.  And, let me tell you, private preschool tuition is not super affordable.  Going to school from 9-3 daily at our preschool (market price for the area, not super pricey) costs more than the in-state tuition our students pay.  As you increase the income, only a few students are utilizing public education.  Later in the report, my suspicions that this is due almost exclusively to the availability of public pre-k for four year olds was confirmed.  Once kids can attend public pre-k, which is still incredibly limited in states like Indiana that don’t offer universal coverage, many middle-class families will make the switch. 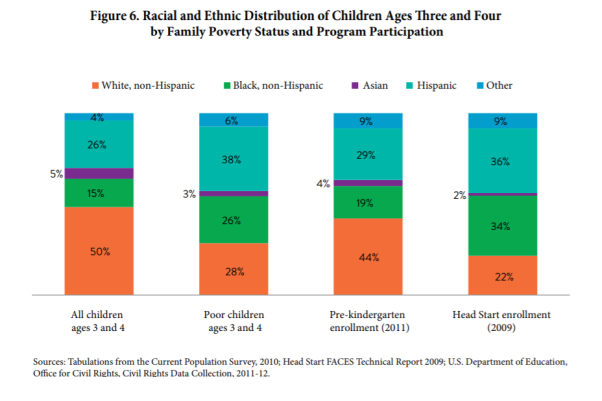 When you begin to break this down by income and race, the Brookings Report becomes even more interesting.  Figure 6 from the report shows that minority children make up a majority of the enrollment in Head Start, a program which is needs-based and targets poor families, and overall for all poor children enrolled in a public preschool.  White children still only represent 44% of the pre-k enrollment but, as we learn in the rest of the report, pre-k is often not just needs-based and is likely to include a larger number of middle-class and wealthy students.  Why does this matter?  Minorities make up a minority of the population but make up a majority of the enrollment in public early childhood education programs.

This is good you may say. While I would agree that it is great kids who are disadvantaged and or of minority status are receiving affordable education, I have to point out that these kids become “tracked”.  The Brookings report and many other studies point out that the efficacy of these public programs varies and minority students and poor students tend to benefit the most from programs which are not exclusively needs-based.

Comparative studies which look at the outcomes of students in other countries with pre-k programs suggest that universal, evidence-based early childhood education is most effective.  In essence, children who are minorities or from a low income household benefit from diverse learning environments where they are not segregated and siloed.  Diversity, thus, benefits all students.  The outcomes of middle class and wealthier students don’t seem to differ but the experiences of disadvantaged children in terms of “readiness” and even language and reading skills are most improved in these environments.

So, I’m assuming you care about equity but maybe your uncle Bob doesn’t. Maybe he sees these programs as a handout and thinks only his nephew, little Jimmy, whose parents make a decent wage and have plenty of privilege, should have access to that first-rate Montessori curriculum or that interesting language immersion Forest Preschool?  Well, you’re in luck at Thanksgiving when this comes up!  I kid, I kid, but the long game is another important reason why universal early childhood education is essential!

Cascio (2017), an economist, finds that the long-term benefits of early childhood education programs are substantial for 4 year olds but that this relationship is conditioned on the type of program they attend.  In universal programs, poor students showed marked gains in reading.  Meanwhile, needs-based programs which siloed poor students did not substantially impact reading outcomes.

Thus, these programs save dollars on remedial learning programs down the road and better prepare students for the fast-paced life of preschool.  No joke.  My sister teaches kindergarten and when she tells me the things they do, my head spins.  I know R is only two but she has a long way to go!

And when you think about how much one’s education determines the risk of later criminal behavior and acts as a protective factor against Adverse Childhood Experiences (ACE’s) – which are also more common for low-income children – you can see just how important this all is!

So, I’m just going to be back here thankful that I have access to a good private preschool but also frustrated that I one, have to pay so much for such good care and education and two, children who don’t have the means we are blessed with will not be able to also receive this education.

View all posts by mamapoliticblog